The iconic photographs of the monastery perched on the side of a sheer cliff face are ubiquitous.  A quick Google search for the site sends you to thousands of photos of this temple just to the north of Paro Town. It has become a tourist tradition to end one’s travels in Bhutan with a  final hike to the temple grounds and to visit the interior shrine rooms dedicated to Padmasambhava (and other important Vajrayana spiritual leaders).

As the story goes, Padmasambhava came to this place to meditate, subdue demons, and bring Vajrayana to the people of Bhutan (and of course to Tibet, Nepal, Sikkim and elsewhere in the region).  Padmasambhava or Guru Rinpoche, is the first teacher of Vajrayana and is considered the second Buddha.  He made his way to Bhutan and meditated in a cave of resident tigers.  The cave can still be seen, if you come at the right time, and the system of caves that fill the mountainside are impressive.

Our trek up the mountainside and to the temple was a challenge in many ways.  The trip leaves a lasting memory on everyone who makes it to the Taktshang.  On this day, we started about 8:30AM.  A few folks in our group chose to ride horses to the tea house situated across the ravine from the temple.  We began our hike on a sunny day and made our way up, up, up.  How many miles and what elevation gain?  Total round trip was 6.7 miles.  Elevation gain and loss was 2250 feet.  Those numbers don’t really tell you the whole story.  One gains and loses elevation on the way to the temple.  In fact, in the last ¼ mile, one loses 800 feet and regains it on the same path (all in a series of mismatched steps).

The path was muddy from days of rain and the plodding of horse hooves on this narrow path.  As we started the hike, we followed about 10 horses on the way up.  Some of us quickly decided to take another, less well-known trail taken by pilgrims to the temple.  I learned of this trail on my last trip and a few of us climbed it.  It was a much more direct route to the tea house and climbs nearly vertically.  Some hand-carved steps were created in the dirt and the trail leads to a series of shrines hidden in the forest.

The rest of the group meandered on the horse trail to the tea house and we made it in a little less than an hour…a fairly fast pace.  We rested for about 15 minutes and then continued.  The next part of the trail climbs about 900 feet in ¼ mile.  The trail is wide but steep and well-trod. If this were a rainy day, the going would be a huge challenge.  As it was, the sun bared down on us and we hiked together, mostly, on the way up.

As you walk this part of the trail, the numbers of people thin and work at their own pace.  As you amble along, its common to strike up a conversation with your fellow hikers.  Most folks are from India and are eager to chat about the trek, your travels, and, of course, the United States government.  While this blog is not a testimony to politics, every single person expressed concern for our country.  I started to keep track of these expressions of concern and worry; of the people I talked to on this trip, all thirty people said basically the same thing: what has happened to the United States?

After that first ¼ mile from the tea house, the trail flattens and you are ABOVE the elevation of the Tiger’s Nest at 10,550 feet.  This gentle reprieve from the climb ends pretty quickly as you pass a small temple and then you see what is in front of you: stairs descending down the cliff wall, around the ravine and up the other side.  Someone said there are about 2000 steps up and down.  You descend steeply down the cliff face and lose elevation rapidly.  Every single one of us was thinking: holy crap, we’ve got to come back UP these steps!

At the bend at the bottom of the stairs is a waterfall descending from the rock wall high above you. A small temple is here and a small bridge that crosses the ravine, open below you.  You can see 1000 feet to the trees on a distant hill.  Yikes!

Once past the waterfall, the climb, again, begins to the temple itself.  The steps wind around the cliff wall with a railing on one side. The steps get steeper as they rise until the last push to a police station and place to put all personal belongings (you can take nothing but your ciothing with you into the shrine rooms).

Now we are done climbing right!?  Wrong. The interior of the temple is filled with very steep steps.  The interior is built on a series of platforms for each of the shrine rooms.  The climbing has, in fact, not ended.  The very first steps past the guard station climb 200 feet in about 50 feet…it’s steep!  The steps are oddly shaped and the stretch is difficult for smaller folks. We are all pretty spent at this point from all the climbing…and yet we continue.

We entered four of the ten or so shrine rooms open to the public.  The entrance to the Tiger’s Nest is closed on this day and so we have to comfort ourselves in seeing the doorway to it.   Namgay tells us the stories of the shrines and the reasons for their placement.  All too soon our visit has come to an end.  It was as close to a kind of pilgrimage as many of us have ever done.

We retrace our steps and move a bit more quickly to the base of the climb.  It took us 3:00 hours to climb up and 1:45 hours to make it down.

As we boarded the bus, silence descended on us all.  We traveled a way down the Paro Valley to a farmhouse for a traditional lunch, archery, and a hot stone bath.  Yes, a hot stone bath.  This traditional form of bathing felt so good.  You sit in a wooden tub, the hot stones piled at one end, separated from you with a wooden series of slats allowing the water to move between the stones and you.  The bath was filled with wormwood leaves that left a wonderful scent and soothing calm on our bodies.

Our traditional lunch included a kind of pork fat, dried meat, potatoes, red rice, vegetables, and peaches for dessert.  All of the food was grown here in a wonderful non-pretentious take on farm to table. Every day in Bhutan are meals that are, literally, farm to table!

Sonam, the son of the owners of this farmhouse, taught us how to shoot Bhutanese bows.  The bows and arrows are handmade from bamboo by Sonam’s mother, Dorji Dema.  She was in the Bejing Olympics in 2008 and represented Bhutan in archery.  Through her notoriety, she is working to break down the very strict gender barriers between men and women in Bhutan, arguing that woman and men should compete together in archery, a sport that is not based on strength alone. 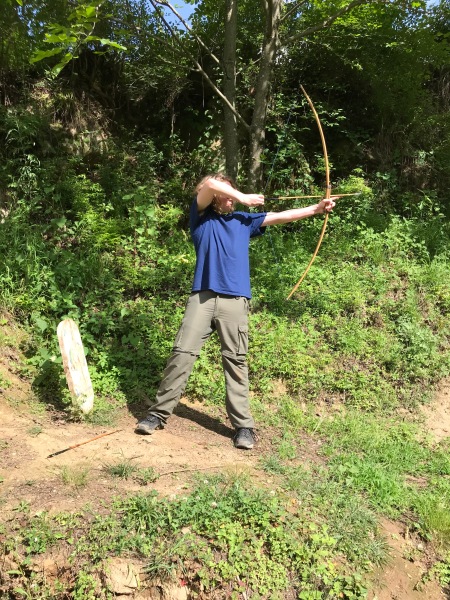 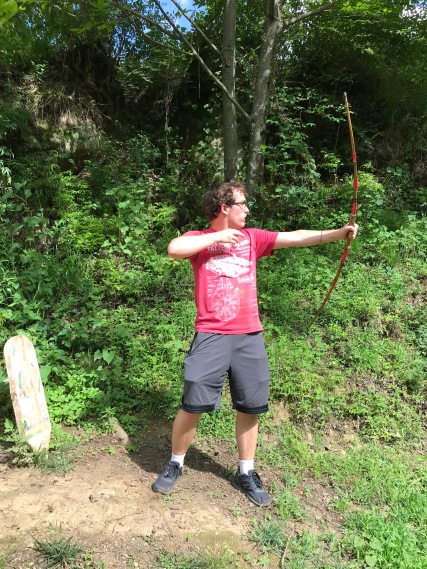 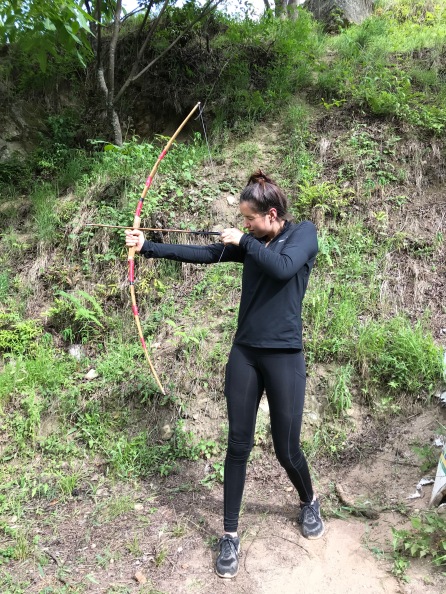 \Our last evening in Bhutan was filled with some laughter around a table, something we’ve all grown to love.  As we went to bed that night, as tired as we were, I imagine that we all reflected, for a minute, on what this trip has meant.

Tomorrow, on to Bangkok!

2 thoughts on “The Trail to Taktshang”

This site uses Akismet to reduce spam. Learn how your comment data is processed.